Why Do People Commit Crime? 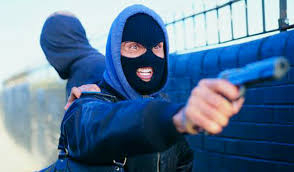 According to Durkheim, people don’t know how to behave in times of rapid social change because norms crumble, and that puts people on edge. That results in a lot of tension in society, which in turn means crime is more likely to occur.

Over the past ten years, the black population in Ferguson has increased by about 15 percentage points, but the police force has stayed heavily white, reflecting the previous demographics in the city. This has led to difficulties for officers, because the norms they had about their police work changed, and they began to get accused of a lot of racial profiling. It also caused a lot of change for community members, both black and white, and so when there was the shooting, it rapidly escalated into violence and the race riots and the looting. This is considered a functional theory.

So for Merton, his main belief is that Americans (or any culture—in this case, it’s Americans) want to meet cultural goals. In this case, meeting federal education progress requirements is a cultural goal, and ideally, you should be getting that through what he calls institutionalized means. Those are the appropriate ways to get there—in this case, it would be hard work, student interventions, and good teaching practices—and then Martin thinks that sometimes people commit crimes when they want to reach that goal.

They want to make their federal progress, they want to get their funding, but they don’t have the means. Maybe they have enormous numbers of poor students or students who don’t speak English, or they may also possibly just not be very good teachers. So, he says, you have five options. The first option would have been conformity, so the teachers would have accepted both the goal and the means: they would have worked harder, starting new programs and met their goals.

Then there’s the second option, innovation: they still really want that goal, they want to make their yearly progress, but they decide to use a different means. In this case, cheating.

Your third option is to just sort of give up on the goal, but still try. These would be teachers that were just sort of doing the bare minimum on their job but not really caring if they meet a goal. This does not make you a criminal (though it likely makes you a bad teacher), but it does make you deviant because you’re giving up on the goal and the social norm.

The fourth option is retreatism. This is when you give up on both the goals and the means: a teacher just totally giving up on the class totally, spending days letting the classroom run wild because you just don’t care anymore.

Finally, the other possibility is rebellion. It is a little rarer, and that’s where you try to change the social structure entirely. Maybe they break off and start their own school and refuse any federal funding or local funding. The more likely options are conformity or innovation, and in the case of this crime, it’s innovation. 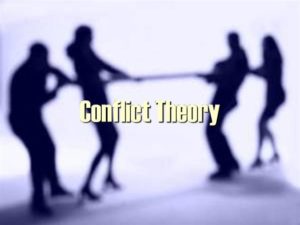 Next, let’s look at a conflict theory approach to a crime. BNP Paribas, which is France’s largest bank, also does business in the United States, and they just got a nine billion dollar fine from the United States government for evading US sanctions against Iran, Sudan and Cuba. What they were doing was that over the course of about ten years they were supposed to stop doing business with those countries, but instead, they kept doing transactions, about a hundred ninety billion dollars’ worth.

A conflict theorist would say that people who are in privileges of power and prestige want to keep up that power and privilege. If that means doing something criminal and avoiding sanctions then they’ll do it to keep making sure that their business stays on top. Eventually, the fine caught up with them, but the sanctions for white-collar crime tend to be relatively minor compared to what the criminals have done, and many times people don’t do any jail time either. 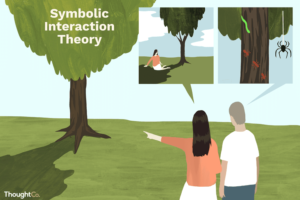 Finally, let’s look at symbolic interaction theory and some discussion of crime. Labeling theory says that when people get a criminal label, they’ll continue to act on it. If you call someone a druggie for smoking pot that they’re more likely to keep getting into harder and harder drugs.

And one debate that’s come up recently, is if you label illegal immigrants as criminals, this could make them more likely to continue in deviance. This has come into the news from a speech that United States Supreme Court Justice Sotomayor gave in February. She said that people then see those individuals as something of less worth. There’s not necessarily a lot of research that’s conclusive on illegal immigration and crime rates, because there’s a lot of factors in there. But it is something to consider when you’re thinking about the way we label people, what behavior does that encourage in the future.

For more, take a look at Why Do People Lie and keep an eye out for more on behavior and culture coming soon!

Why Do People Stack Rocks?

Why Do People Resist Change?

Why Do People Believe In Conspiracy Theories?

Recently, large social media platforms, such as Twitter and Facebook, have been making an effort to de-amplify what they consider to be fake news. Unsurprisingly, a decent portion of that fake news consists of conspiracy theories. In fact, infamous charismatic conspiracy theorist Alex Jones saw his oddly popular YouTube channel removed in order to eliminate ...

Please log in again. The login page will open in a new tab. After logging in you can close it and return to this page.